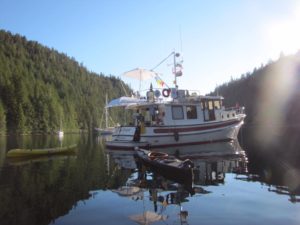 It’s been a fun summer of yacht sales.  This last week I had two nice comments from customers who bought a tug from me.
My friends Randy and Jackie had been looking for a boat for about a year.  Having discovered over the last couple of years that they love cruising, it was time to move up to a bigger boat.  Together we looked at about everything on the market. Knowing them well I really felt that a 37 Nordic Tug was the boat that would fit there overall style and comfort needs.
When the right 37 came along at the right price we jumped on it.  After some upgrades to the Anniversary Addition 37 and a few shake down cruises they were off to Desolation Sound and beyond.
Just the other day Randy called from Jonstone Straight.  He said they were out in the Straight and it was rough and nasty and they felt perfectly safe.  They were so thrilled with the way the boat handled the rough water.
And of course I was happy to hear that I had put my friends and customers in the right boat.
I also had just herd from a 2001 Nordic Tug 32 customer that I just sold.  He was thrilled with the way his Tug handled on a circumnavigation of Fadalgo Island.  Having owned sail boats up until this point he chose to cruise at 1100 RPM 6.5 knots.  But then when he got to Deception Pass he reported that he was looking at a 3 knot current and some scary looking whirlpools. So he put the RPM up to 2000 and the boat scooted right through with ease.  “That’s what Nordic Tugs are all about, I said”